COVID-19
Read our statement regarding our services during the Coronavirus Covid-19 Pandemic.
Return to Nav

Our Belmont Hill Funeral Directors can provide a meaningful funeral now for your family and an additional memorial or commemorative service later once everyone can be together again.
Where to find us
4 Lee High Road
Lewisham SE13 5LQ
GB 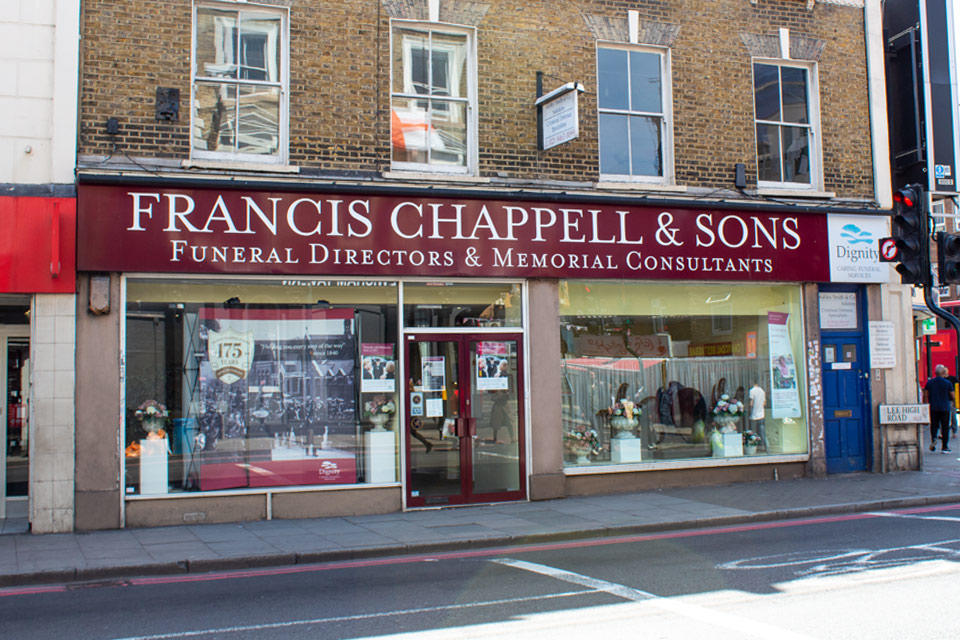 About our Belmont Hill funeral home

Francis Chappell & Sons Funeral Directors in Lewisham are proud to be one of the longest standing funeral directors in the community, celebrating 175 years of helping families in 2016. Our funeral home has recently been refurbished and tastefully decorated to provide you with a warm and comforting environment for you to visit whenever you need.

We now have disabled access and two chapels of rest which are suitable for everyone in our multi-cultural community. We can cater for religious and non-religious ceremonies, from simple, modest services to elaborate celebrations of life. Whatever you feel is right for your loved one, we are here to help you every step of the way.

If you are looking for funeral advice or guidance in Lewisham, Ladywell, Hitherwell, Saint Johns, New Cross, Catford or further afield, please get in touch.

At Francis Chappell & Sons Funeral Directors, we serve families with the greatest care, from our funeral directors in South East England.
Read more

We are near the Lewisham Clock Tower, five minutes walk from Lewisham Police Station.

There is car parking available at Clarendon Rise Shopping Centre nearby.

We take the greatest of care when we look after families. Read what our clients have to say about their experiences with our funeral directors in Lewisham.
4.3
Rating 4.3
based on 3 reviews
Miss Angina A.
Rating 3.0
The overall service was ok. We initially met with Jillian who, we thought explained everything clearly. We were then called in by Tracey who gave us extra information and required an additional payment outside of the plan before the day of the funeral- we were told that the funeral would not go ahead if the payment was not made. The viewing was organised and Jillian was there to make sure that it ran smoothly. Before the viewing Tracy mentioned that she didn't want any trouble on the day of the viewing- not sure why this was mentioned; it seemed rather odd. There were a few restrictions due to the current situation but we were told about the changes and were updated often.
We had opted for a payment plan and it would have been great if we were taken through the plan with someone when arranging the funeral so that we were aware of everything included or anything that we were expected to pay extra for. Initially Jillian said that production of the programme was in the plan and then Tracey said that it was not. We ended up having to quickly make up some of our own.
If I could rate the actual funeral service separately I would give it 5 stars. Nick- was an absolute diamond! From arriving with our dad to the procession, the burial and taking us home, Nick was extremely caring and I can not fault him.
Unfortunately, other elements brought the rating down.
There was no spray given for the casket which was included in the plan. I am still trying to sort this out.
I was told that Tracey would call after the funeral to see how it went. That did not happen. After the funeral all contact ceased. It would have been nice to have a phone call at least. It makes it seem as though the support given is not personalised but just a day at the office.
Response from Francis Chappell & Sons Funeral Directors
Thank you for your 3 star review. I am sorry to see that you have some concerns, if you would like to discuss these further please contact our Client Relations Team on 0800 783 7171.
Mrs Sarah B.
Rating 5.0
Both my grandparents had funeral plans with Dignity. Francis Chappell & Sons were amazing from the offset. They were able to give my family, peace of mind in a very difficult time of need. Correspondence was fast and effective at all times. Tracey was a gift, in all, she did for nan and grandad. We are extremely grateful to all the team for their excellent quality of care towards all members of my family.
Sarah Booth
Response from Francis Chappell & Sons Funeral Directors
We appreciate you leaving a review online for your experience with Francis Chappell & Sons. We take pride in giving outstanding service to our families and I am pleased that we were able to look after you and your family at this difficult time.
Mrs Beryl M.
Rating 5.0
I am so happy with the kind, thoughtful, respectful service Francis Chappell funeral Directors gave to my husbands funeral. It is not often that one has to deal with a arranging a funeral, and the experienced staff were there to guide me through all the various procedures and aspects of this important family event. My husband was so kindly and respectfully presented for my visit to the chapel of rest. The arrangements for the design and printing of the Order of Service and the enlarged portrait of my husband were superb, and a precious souvenir to keep. The music I requested to be played was sourced perfectly and appropriate. The service was conducted reverently and the presentation of the flowers afterwards and the collection of the cards displayed with them for me to keep were a thoughtful touch. All the staff were so smartly dressed on the day and the cars superb. Although this was obviously a very sad day I have been left with a very Altogether I was left with a were
Response from Francis Chappell & Sons Funeral Directors
Thank you for taking the time to send your online review to us. We are glad that we were respectful of your needs at such a difficult time and that we provided the highest level of care and guidance for you and your family.
Displaying reviews 1 - 2 out of the 3 most recent