With funerals available from £925, our Worthing funeral directors are dedicated to delivering the highest standard of funeral care for the lowest guaranteed price.
Where to find us
191 South Farm Road
Worthing BN14 7TW
GB 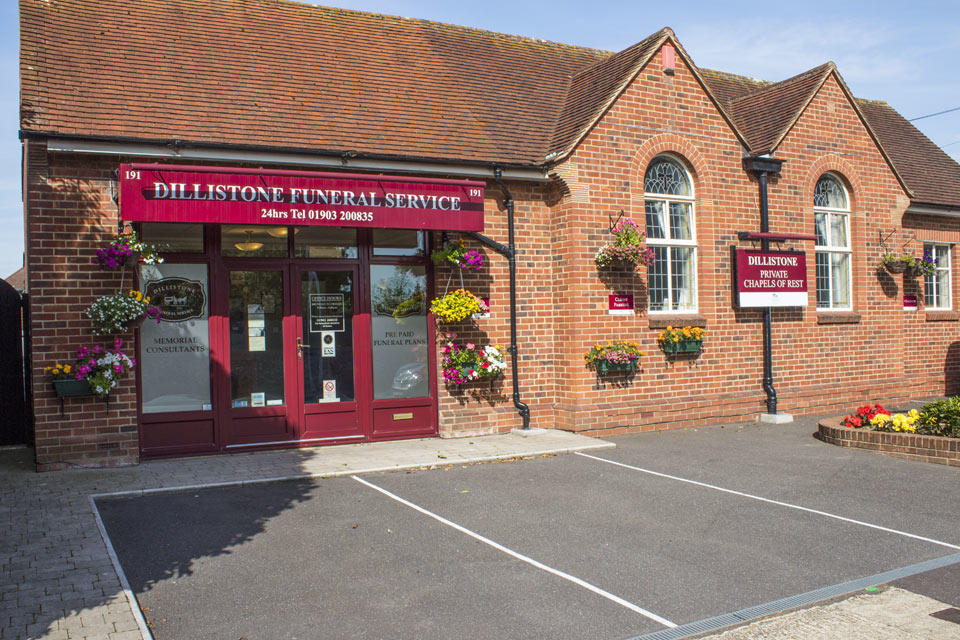 About our Worthing funeral home

Dillistone Funeral Directors in Worthing provides compassionate funeral care to our local community and to those living nearby in the West Sussex area. We are here for you at this difficult time, to offer support and take care of arranging your loved one’s funeral.

Whatever kind of funeral you choose, we will ensure it is carried out to the highest of standards. Should you choose an Attended Funeral, the service can be tailored to meet your specific wishes, however unique, allowing you, your family and friends to pay your respects in the most personal and loving way.

The team at our Worthing funeral directors provides professional care, along with guidance and advice, helping you to reach important decisions regarding the funeral. We will also help to ease some of the concerns or feelings of uncertainty you may be experiencing. Remember, you are not alone.

Our purpose built funeral home is located on Worthing’s South Farm Road, opposite Broadwater Cemetery. Along with the families of the town, we also serve those living in the surrounding villages, such as Angmering, Findon and Steyning.

If you wish to spend time with your loved one prior to the funeral, you have the choice of three chapels of rest. All are designed with your comfort and privacy in mind, and provide a peaceful environment in which to reflect and remember. We can open these outside our normal hours if it is more convenient for you.

Having provided funeral care to Worthing for more than 100 years, the team at our funeral directors will use their expertise to help you. To arrange a funeral for your loved one, please call 01903 200835 as soon as you need us.

Funerals from £925. At Dillistone Funeral Directors we serve families with the greatest care, offering the lowest priced funerals in West Sussex.
Read more

Our exceptional service for the lowest price within our local community. Guaranteed.

We regularly check our competitors' prices and are confident that we are unbeaten locally. To give you further peace of mind, we also promise to match any local prices you may find after arranging a funeral with us.

Our price promise ensures that we will provide your chosen funeral for the lowest price in our local community.

2. The price promise relates to all of the funeral services provided by us and is not applicable to costs charged by a third party as part of the funeral

3. If using a funeral benefit discount, this will be taken off the Dignity price before any comparisons to competitors’ prices are made under the price promise

4. We reserve the right to apply, withdraw, modify or terminate the price promise in whole or in part at any time or for any reason

5. Claiming on the price promise does not change or affect the Terms and Conditions of any products or services that you purchase

We are on South Farm Road, opposite the old Broadwater Cemetery.

You can park for free at our funeral home.

4.9
Rating 4.9
based on 38 reviews
Mr Malcolm S.
Rating 5.0
Excellent help from Paul and Rachel at Dillistones. Very helpful, and thanks a lot.

I felt my daughter & I were listened to helped through how we would like to have the whole process as we had planned. We were delighted to be told we could request a motorcycle & sidecar to carry my husband's coffin (something he wanted!!)

I later asked if a couple of amendments could be made, which were happily done.

On the day of my husband's funeral, which we wanted as an informal biker themed celebration of his life, everything went to plan. All who attended said later that they thought it was so appropriate for him and 'the best' funeral they had been to.