COVID-19
Important information about arranging a funeral during the Coronavirus pandemic.
Return to Nav

Our New Moston Funeral Directors can provide a meaningful funeral now for your family and an additional memorial or commemorative service later once everyone can be together again.
Where to find us
347 Hollinwood Avenue
New Moston
Manchester M40 0JX
GB 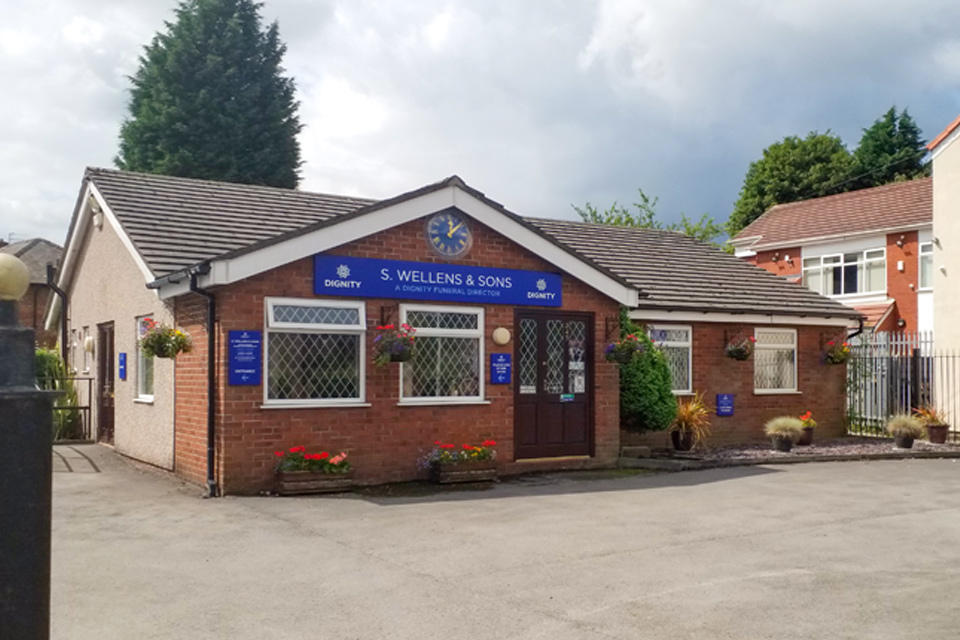 About our New Moston funeral home

From our funeral home in New Moston, Manchester, S. Wellens & Sons Funeral Directors has provided care to the local community since 1996.

This is not where the story of S. Wellens & Sons Funeral Directors begins, our first funeral home opened in Middleton in 1870. We then expanded to Chadderton and Blackleybefore opening our funeral home here in New Moston.

We will be there for you every step of the way, helping you make all the decisions to ensure the day is truly unique and personalised to reflect your loved one’s life.

No request is too big or too small, we will tailor the funeral service to your exact wishes.

We are always there for you, with our phone lines open 24 hours a day, every day of the year. Please call as soon as you need us.

At S Wellens & Sons Funeral Directors, we serve families with the greatest care, from our funeral directors in Greater Manchester.
Read more

Our funeral home has a car park which you are free to use.

Here are what the families who have entrusted us to look after their loved one have said:
5.0
Rating 5.0
based on 12 reviews
Mr Christopher W.
Rating 5.0
We can’t thank S.Wellens & Son's enough for the exceptional service they provided following our mother’s passing, from the planning before the funeral, transferring mum into there care and still after the funeral checking in. Very professional caring company.

We would like to especially thank Linda from the Moston branch, she supported me and my family through the worst time of our lives. We was dreading having to arrange the funeral, but Linda had such a warming / professional manner, it was very easy to put something so sad together with ease.

Thank you very much for all your support and services, would highly recommend you.
Response from S. Wellens & Sons Funeral Directors
Thank you for your thoughtful and detailed review. It is incredibly helpful to other families in the same circumstances as yourself. The team will be very pleased to hear that their care and support made a difference to your family.
Mr Paul T.
Rating 5.0
The funeral director was super both my mum and dad had been well served by your staff great 👍 would recommend you to any bereaved family great service well done.
Response from S. Wellens & Sons Funeral Directors
Thank you for your review. Your kind words mean a great deal to the team who always work very hard to deliver great care.
Miss Lisa M.
Rating 5.0
Undoubtedly the most down to earth, professional people i have dealt with. Alison & the rest of the team went above and beyond to help. Nothing were too much. They made every part so stress free and were extremely professional without being overbearing. I have dealt with them on a few occasions & there is a reason I always come to them during these times. The way everything were delt with during Covid 19 & with regulations we're outstanding. They are a credit to the company
Response from S. Wellens & Sons Funeral Directors
Thank you so much for this lovely review which means all the more at this very challenging time. The team are working very hard to ensure that each family receives outstanding care and I am so glad their dedication has given you the service you needed.
Mr Peter F.
Rating 5.0
Condiderate and helpful throughout
Response from S. Wellens & Sons Funeral Directors
Thank you for these lovely words, it means so much to the whole team.
Mrs Susan B.
Rating 5.0
Wellens funeral services recently arranged our mums funeral, this was very hard due to the current situation with the Covid 19 virus, they made what was a very hard, emotional and sad time, for us a family a lot easier.
Debbie was very caring from the first phone call, and had a great understanding as to what we were going through.
She and Linda were very respectful and courteous, nothing was too much trouble.
They were only a phone call away and helped with any problems.
We cannot thank Welles and their staff enough, and would highly recommend their services.
Susan Biddle and family.
Response from S. Wellens & Sons Funeral Directors
Thank you for your 5 Star review
Mrs Carol W.
Rating 5.0
We was treated with compassion and all our needs were dealt with in a caring way
Response from S. Wellens & Sons Funeral Directors
Your comments will provide great encouragement to the team to keep doing their job to the best of their ability.
Mrs Elaine D.
Rating 5.0
My mum had a funeral plan in place and from the first time I contacted Dignity to let them know that my mum had passed away, the lady on the telephone who was one of the night staff team had the upmost respect, put me at ease and took as many details as she could and said that when I needed to phone again, it would all be on the computer for someone else to take over. I was very vulnerable at the time and she was brilliant with me. She explained what I needed to do as my mum had died in a Care Home and they arranged for my mum's body to be taken away during the night.

Once I had got the death certificate, I contacted Alison to arrange the funeral. Again, she was brilliant and had remembered me and my brother from when my father had passed away a couple of years before. She explained everything that we needed to do, but with a funeral plan in place, most of the decisions had already been made by my mum previously which made it easier. We decided on a couple of dates which would be suitable so after we had left, Alison contacted the vicar at mum's church but there were renovations being done inside the church so it was not possible to hold a church service there. Alison contacted me to let me know so we decided to just have the service at the crematorium. Alison kept us informed at every stage. When we had decided on music, I spoke to Linda who arranged it for us.

Some of the family wanted to pay their last respects to mum in the Chapel of Rest and they made it possible for family members to come at various times. Nothing was a problem. On the day of the funeral, family members were carrying mum's coffin and they explained the best way to carry it. Alison made a difficult time of our lives so much easier for us by the way she puts you at ease, explains everything and takes over for us. We were very grateful that she arranged mum's funeral for us and apart from the weather, it went very smoothly.

From the office staff to the car drivers, they were a credit to the company. I would recommend Dignity and S Wellens and Sons as we could not fault anything.