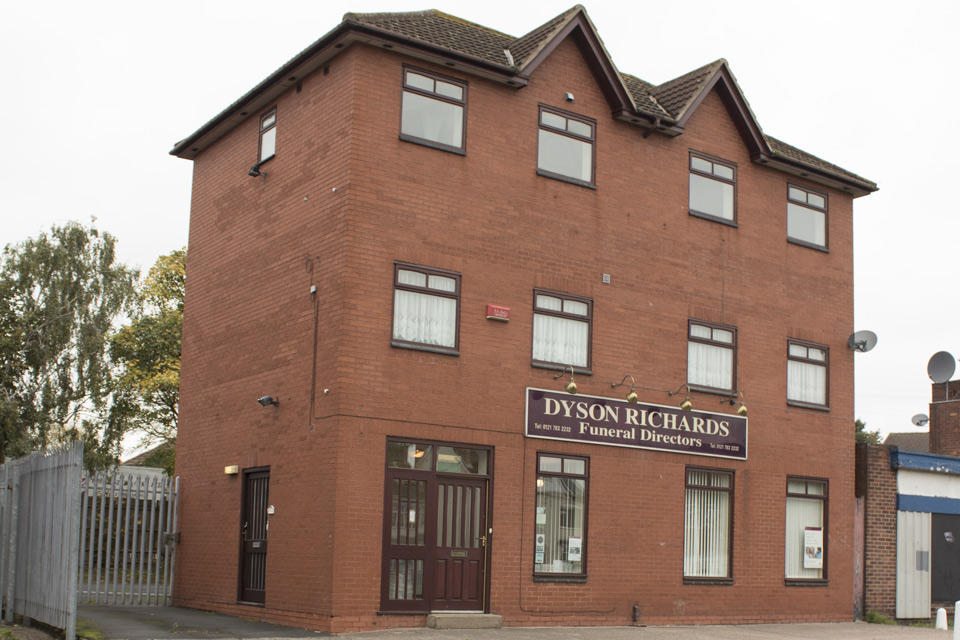 About our Stechford funeral home

Welcome to Dyson Richards Funeral Directors in Stechford, where we serve the local community of Birmingham with the highest standards of funeral care and services; ensuring the families under our care can honour the memory of their loved one exactly the way they want to.

We believe every funeral service should be unique and will work closely with you to ensure that every detail of the service reflects your loved one and the life they lived.

Our funeral home on Station Road serves the local communities of Stechford, Lee Hall and Little Bromwich with the utmost compassion and care. Located just a few minutes' walk from Stechford train station, we are easily accessible from anywhere in Birmingham.

We understand that losing a loved one can be difficult, which is why we want you to know that we are here to offer you our full support. You can contact us 24 hours a day by telephone, so we will be there when you need us most.

At Dyson Richards Funeral Directors, we serve families with the greatest care, from our funeral directors in Birmingham.
Read more

At {{BRANCH_NAME}} we offer two funeral packages for you to choose from. However you choose to honour your loved one’s memory, we will be there to help and support you. If you are unsure what these options entail, please do not hesitate to contact us on {{BRANCH_PHONE}}.

193A Station Road
Stechford
Birmingham B33 8BB
GB
Get Directions

There is free parking available at the front of the funeral home.

Losing a loved one is never easy, no matter how prepared you think you are. There are a lot of things to think about after the death of a loved one and our guides below are here to help you tackle these. Alternatively, you can always call us on 0121 783 2232 for personalised advice.

Read below for reviews of our services provided to families in Stechford and beyond.
5.0
Rating 5.0
based on 9 reviews
Mrs Helen C.
Rating 5.0
Professional and friendly service. Nothing was too much even poor Scott walking in front of the hearse in the pouring rain. He was very patient calming and reassuring.
Regular check ins from Sharron to see how we were managing our grief she is always there to listen.
So happy that dad was given the service he deserved
Thanks again
Response from Dyson Richards Funeral Directors
We really appreciate you taking the time out to share your experience online with us. It helps other families in their time of need. I am pleased to hear that you found our staff to be professional and respectful.
Miss Mandy N.
Rating 5.0
I was very, happy how Dyson Richards. help me thought the passing of my mum. Barbara Nash. the Service. was lovely Service.
Response from Dyson Richards Funeral Directors
Thank you for sharing your experience online. It is comforting to know that the team were there to support you through this time and relieve some of the pressure through guidance and support.
Mrs Bernadette D.
Rating 5.0
Having never had to arrange a funeral before (thankfully) Sharron, who I spoke to at Dyson Richards was very very helpful and friendly in providing me with all the guidance and documents that was required. Also, if I rang and she was not available at that time and had to leave a message, she always rang me back the same day. On the day of the funeral I also had a call from Karen advising me what time that they would be arriving at the cemetery, also it was all very dignified and covid safe. I would certainly recommend their services if asked.
Response from Dyson Richards Funeral Directors
It means a great deal when people take the time to share their experience and to highlight individuals in the team who have made a difference. Our quality of care is something we are proud of and we know what a difference it makes to the families in their time of need.
Mr Nigel M.
Rating 5.0
Everyone was very polite, efficient, and all very helpful. From booking the service at the office, to the actual funeral service, was conducted very professionally. All family members were delighted with the days proceedings.
Response from Dyson Richards Funeral Directors
We are grateful of you using our services to provide something special for your loved one. Your family continues to be in our thoughts and we are honoured to have been able to give you the service you needed.
Mrs Karen B.
Rating 5.0
I wanted to leave a review, with regards to the commitments the professional approach the understanding absolutely nothing was to much trouble to explaining the process.
In this difficult time no church no minister a minister was found for us who was wonderful the staff explaining the process couldn't thank them enough for everything made a difficult time less painful cannot ask for more than that.
Thank you all again
Response from Dyson Richards Funeral Directors
Thank you so much for this lovely review which means all the more at this very challenging time. The team are working very hard to ensure that each family receives outstanding care and I am so glad their dedication has given you the service you needed.
Mrs Rosemarie D.
Rating 5.0
This was my first experience of having to arrange a funeral- but I needn’t have worried. N. made it really easy right from my first conversation with her. Nothing was too much trouble, and you really did feel important as a customer and everything was totally explained to me in the most lovely manner. Every call was followed up, N. even rang me with a suggestion about the bearers having blue ties instead of black, due to the theme of celebration of dads life in the service. Additional arrangements to cater for my wheelchair bound mother were handled with complete empathy and compassion. I cannot fault any aspect of the care we received. With grateful thanks to everyone concerned.
Response from Dyson Richards Funeral Directors
We really appreciate you taking the time to leave a review for Dyson Richards Funeral Directors. We know how special each family is and aim to convey this in all aspects of our work from the arrangements to the day of the service. It has been a privilege to support your family and care for your Father. We are proud of the whole team.
Mrs Rachel H.
Rating 5.0
We would like to give a 5 star rating to Dyson Richard's for their organisation and support for us all for Verini Stassinopolou's service which took place at Edward Road Baptist as well as her burial which took place at Quernmore, Lancashire. It was excellent.

Nina was brilliant in organising and liaising with the Dyson Richard staff in Lancaster and also relevant staff in Quernmore, as well as liaising with us. It would have been complicated to arrange. She has excellent people skills, so important at a time like this and we are very grateful. In fact we would like to thank all the staff, Liane at the Shirley branch who fielded our calls too, to pass on to Nina. Karen who looked after us for the service in Birmingham as well as Dyson Richard's undertakers and all staff who looked after us the Lancashire end, at Quernmore.

They asked how we were at various stages and were sympathetic to our needs. It made all the difference.

The service at Edward Road Baptist church was recorded and put on the church website an hour after it had taken place. After relatives in Greece and friends around the world had seen it, Verini's brother in the USA phoned up especially to say how brilliant it was, they were all so touched - a tribute again to Dyson Richards Funeral Directors staff. Many, many thanks to all involved.
Response from Dyson Richards Funeral Directors
Thank you for your thoughtful and detailed review. It is incredibly helpful to other families in the same circumstances as yourself. The team will be very pleased to hear that their care and support made a difference to you and that we were able to respond sensitively to the specific needs for your Friend and their family.
Mr Lee B.
Rating 5.0
It's the 3rd time of using Dyson Richards and as always they make a very stressful and sensitive time more bearable. Thank you all for your caring support
Response from Dyson Richards Funeral Directors
Thank you for taking the time to send your online review to us. I am pleased that our team looked after you so well and that you had the trust and confidence in our team to be able to deliver the service you expected.
Ms Susan M.
Rating 5.0
Excellent service from start to finish, explained everything in detail and were so kind and considerate, nursing me through all the details and making the whole process feel calm and under control at a time when I could not focus. Thank you for your empathy and understanding.
Response from Dyson Richards Funeral Directors
Thank you for sharing your experience with us on your online review. I am glad we were able to provide you with the support and guidance needed and that we were able to help make things easier for you at such a difficult time.
Displaying reviews 1 - 2 out of the 9 most recent