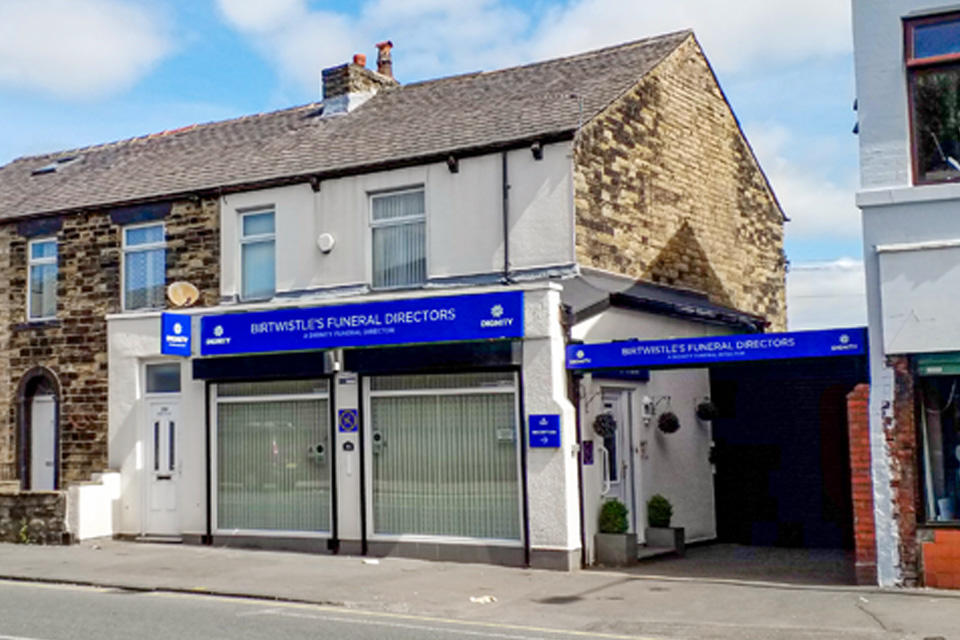 About our Bolton funeral home

At Birtwistle’s Funeral Directors in Bolton, it is our duty to be there for you in your time of need. We are here to take care of all the funeral arrangements for your loved one's farewell, treating you with uncompromising compassion every step of the way.

You can find our funeral home on Halliwell Road, a few doors down from the Robin Hood Inn. We are a short distance away from the A58 – Moss Bank Way and the Blackburn Road, which means we are easily accessible from the whole of Bolton.

We cater for everyone in our local community, no matter what beliefs or preferences you may have. The MA Mission Mosque is on the same road as our funeral directors and we are close to the Taiyabah Mosque, Masjid-e-Noorul, the Parish of Saint Paul, Bolton Parish Church and the Bank Street Unitarian Chapel, so we can arrange the service to match all your religious needs.

If you would prefer a humanist or non-religious service, you can still trust us to organise a beautiful send off for your loved one.

Our recently refurbished funeral home is a comfortable and welcoming place for you to visit during your time of need. Our facilities are maintained to the highest standards, so we can look after your loved one with dignity and respect.

We are here for you, 24 hours a day. Please pick up the phone and call us as soon as you need us.

At Birtwistle's Funeral Directors, we serve families with the greatest care, from our funeral directors in North West England.
Read more

Please give us a call so we can advise you on where to park.

5.0
Rating 5.0
based on 13 reviews
Mr Barry G.
Rating 5.0
I recommend Birtwistles above any other funeral directors. My Mum had a pre-paid Dignity funeral arranged and they were so professional, caring and sympathetic towards my Mum and the rest of the family both as we were making the arrangements and after she passed away. I was devastated when she passed and my head was all over the place, but Jane and Shirley of Birtwistles helped and guided me through it with sympathy and compassion. I don't think I could have made it through without them. Its not only about the person who has passed away, but the one's who are left behind grieving as well. They looked after my Mum like she was a queen and when she was laid out in the casket it's as if she was just asleep. On the day of the funeral everything was done with such professionalism and compassion as if it was a relative of their own. Thanks to Kit, he was brilliant making the whole thing go without a problem. Put it this way, I think so highly of Birtwistles and their pre-pay Dignity plan I am sorting my own out with them now.
Kindest Regards Barry Gardner
Response from Birtwistle's Funeral Directors
We really appreciate you taking the time out to share your experience online with us. It helps other families in their time of need. I am pleased that we provided the highest level of care and guidance for you and your family and it is always good to hear that individual members of our team have provided a service to you to the best of their ability. Thank you for this positive recommendation, it is greatly appreciated.
Mr Trevor B.
Rating 5.0
Very helpful and sensitive throughout the whole process - I just couldn't fault them on any aspect of their service.
Response from Birtwistle's Funeral Directors
Thank you for leaving a review online for Birtwistle's Funeral Directors. It has been a privilege to support your family and care for your loved one.
Mrs Glenda D.
Rating 5.0
I recently buried my beautiful mum and it was very difficult for me to organise her funeral, but with the help,compassion and respect from birtwistles it was a lovely and dignified send off. From start to finish all the staff was very very respectful and talked me through the whole day step by step. Thank you all Glenda
Response from Birtwistle's Funeral Directors
We understand how important it is to keep families informed and I'm pleased that our team did exactly that for you. Thank you for using our services for your loved one.
Mrs Janet B.
Rating 5.0
Have used Birtwistles twice over the last 5 months and both times all members of staff have been so very kind and helpful. Really felt that nothing was too much trouble for them, would not hesitate to recommend them.
Response from Birtwistle's Funeral Directors
Thank you for entrusting us with the care of another loved one.
I am glad that our staff went above and beyond to deliver the service you expected.
Mrs Sheila P.
Rating 5.0
Kit and the team were amazing and very supportive throughout the whole process. Made a difficult time a lot easier to get through ☺️
Response from Birtwistle's Funeral Directors
Thank you for these lovely words, it means so much to the whole team.
Mr Raymond K.
Rating 5.0
The whole experience from meeting up to decide on what type of service to the actual funeral and then the statement of expenses was done in a very professional manner and the staff did their best to co-operate to make it an experience as close to what we would have wanted and that my wife would have been touched by.
Response from Birtwistle's Funeral Directors
We are grateful of receiving your online review. I am pleased to hear that our team were so accommodating and their recommendations were helpful and the team managed to make the day run as smoothly as possible for you.
Mrs Valerie M.
Rating 5.0
Vanessa & all the Funeral directors at Birtwistle’s were kind considerate and dignified in making the funeral arrangements for our late brother, Ernest Joseph MacDonald. Nothing was too much trouble and we were kept up to date with the arrangements.
We had difficulty in planning this funeral as I live in London, Ernest was in Warrington and the funeral took place in Bolton. It was during the middle of the covid lockdown so even more potential difficulties.

The funeral directors organised so much for us, identifying and liaising with the celebrant for the service and the limousine. We were very pleased with the professional services provided which had a personal touch. Vanessa treated the family and in particular, our Mother with respect and sensitivity which made this very difficult day so much easier than it could have been. They all made us feel we were among friends.

I would have no hesitation in recommending Birtwistles to others.