With funerals available from £995, our Bamber Bridge funeral directors are here 24/7 to help arrange a fitting farewell for your loved one.
Where to find us
154b Station Road
Bamber Bridge PR5 6TP
GB 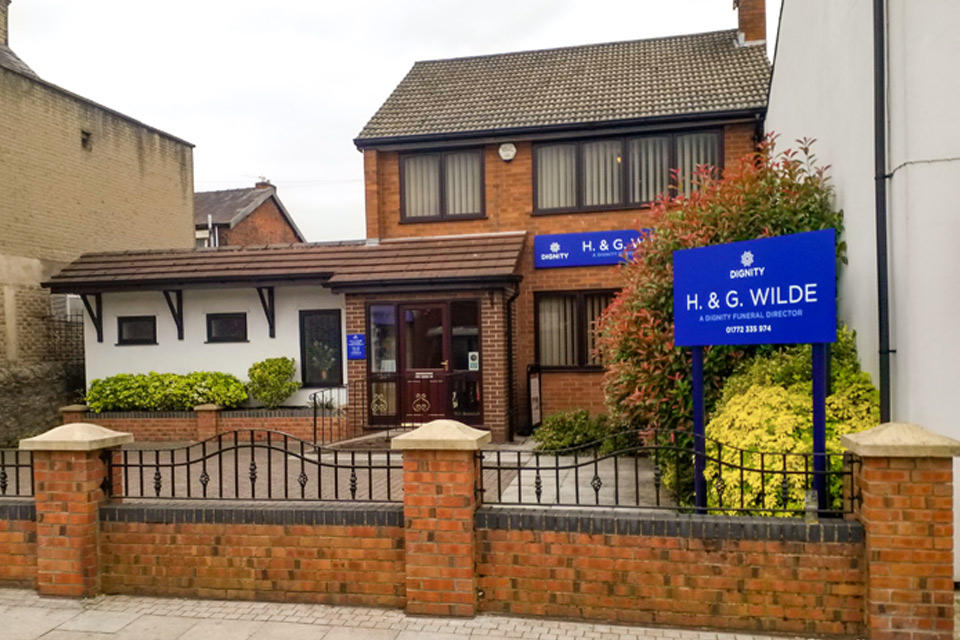 About our Bamber Bridge funeral home

At H. & G. Wilde Funeral Directors in Bamber Bridge, we understand that you will never stop caring for your loved one, especially during this difficult time. This is why our number one priority is to organise a truly unique and personal funeral, which pays homage to the way they lived their life.

You can pick every aspect of the funeral service from the route the cortege takes, to the floral tribute to the music or hymns. Whatever your preference, we can cater for this.

Whether you would favour a religious, traditional or humanist funeral or a bright celebration of life, we are able to give you a completely bespoke funeral service.

You can find our funeral home on Station Road, less than half a mile from Bamber Bridge rail station. We are easily accessible to the whole of South Ribble and Preston, neighbouring the communities of Higher Walton, Lostock Hall, Farington, Leylend and Gregson Lane.

We want to make a difficult time a little easier for you; from the moment you get in touch, we will give you all of the support and guidance you need, with uncompromising kindness every step of the way. Our dedicated team is available at all times, 24 hours a day, so do not hesitate to call us.

With three different packages available, you can rest assured that we'll be able to arrange the funeral you have in mind for your loved one. Learn more about our Attended Funeral, Crematorium Service and Unattended Funeral below.

We are situated on Station Road Bamber Bridge opposite the Royal Bank of Scotland and Morrisons Supermarket.

There is car parking available at the rear of our funeral home.

5.0
Rating 5.0
based on 18 reviews
Mrs Amy H.
Rating 5.0
My mum always said she wanted H+G Wilde’s to do her funeral.
My family would like to thank Paul,Joan and Linda for making our mums funeral very special and personal. Their compassion and professionalism is exceptional nothing was to much trouble.
When the day came we couldn’t of asked for more and all of our family and friends commented on how beautiful it was. Thank you again
Response from H. & G. Wilde Funeral Directors
Thank you for these lovely words, it means so much to the whole team and I am glad that you chose Wilde Funeral Directors to look after your Mother. It is always good to hear that individual members of our team have provided a service to you to the best of their ability.
Mr Timothy F.
Rating 5.0
From the moment I first called H.& G. Wilde and spoke to Joan, I knew that I would receive a very empathetic, kind and professional service.

All the team members with whom I spoke, including Paul, Linda and Joan, were always kind, caring and considerate. The team clearly wanted to do everything possible to ensure that my late aunt was given the best possible journey to her final resting place. I was touched by their attention to detail; they quickly understood what was important to my late aunt and made suggestions as to how these could be incorporated into the arrangements, including the placing of a bunch of daffodils (my late aunt's favourite flowers) into her hands, along with her prayer book. All the arrangements for the funeral and subsequent interment of my late aunt's ashes were particularly well organised, and everything ran very smoothly on the day. I, and the other family members, felt it was a fitting and dignified tribute to my late aunt, helped in no small part by the pallbearers who demonstrated such respect and dignity in carrying my late aunt on her final journey.

I have no hesitation in recommending H.& G. Wilde to families who, at a most difficult time, need a Funeral Director whom they can trust to provide a caring, compassionate, dignified and professional service for their loved one's final journey.
Response from H. & G. Wilde Funeral Directors
Thank you for leaving a review online for H & G Wilde Funeral Directors. It's good to hear the team gave you outstanding support and guidance throughout your arrangements and that day was carried out to a high standard.
Mrs Ann H.
Rating 5.0
Very professional treated us with dignity
Response from H. & G. Wilde Funeral Directors
It has been a privilege to look after your Husband. Thank you for your 5* review.
Mr Ian M.
Rating 5.0
From the moment of contact the staff explained everything to me and what they could offer but by no means was anything compulsory. I was kept well informed right up to the day and everything on the day went just as I wanted. I also received a courtesy call a week later. All staff were caring, considerate and polite.
Response from H. & G. Wilde Funeral Directors
I am glad that the final wishes for your mother were carried out to the highest standard. Thank you for your 5* review.
Mr John P.
Rating 5.0
I cannot thank the team enough. Every aspect of the service was superb. Caring, professional, efficient, willing to go the extra mile.