COVID-19
Read our statement regarding our services during the Coronavirus Covid-19 Pandemic.
Return to Nav

Our Crawley Funeral Directors can provide a meaningful funeral now for your family and an additional memorial or commemorative service later once everyone can be together again.
Where to find us
8 Grand Parade
High Street
Crawley RH10 1BU
GB 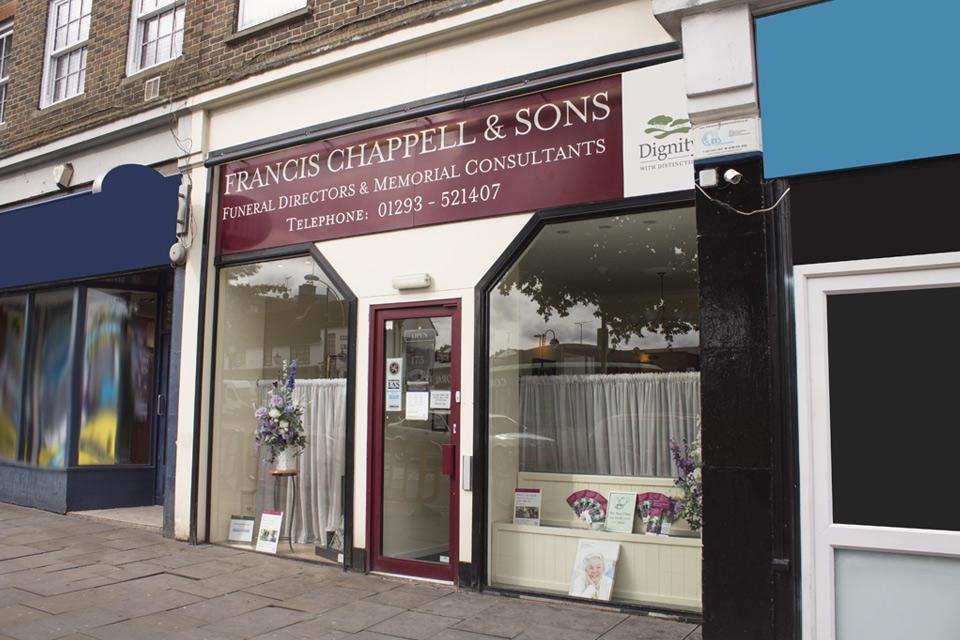 About our Crawley funeral home

A trusted name when it comes to funeral care, Francis Chappell & Sons Funeral Directors in Crawley promises you the same high standards of service upon which our longstanding reputation is built. We have provided a shoulder to lean on to the bereaved families in this part of West Sussex for almost four decades and would be honoured to arrange the funeral of your loved one too.

At this difficult time, the support you receive can sometimes make a small difference. The friendly team here at our funeral directors will always be ready to offer you guidance and advice, helping to ease any concerns you may have regarding the funeral, as well as offering comfort to you and your family.

We will arrange the send off you want for your loved one, tailored to your specific wishes to ensure it is a personal and loving reflection upon their life. So whether it is a religious service or a humanist one, a traditional ceremony or something a little more unique or modern (a woodland burial, for instance), you will be able to say your farewell in the manner of your choosing.

The Francis Chappell name was established in 1840, with our Crawley funeral directors opening in the 1980s. We can be found on the Grand Parade on Crawley High Street, a central location that makes us accessible to the whole of the town, including the neighbourhoods of Bewbush, Broadfield, Maidenbower and Pound Hill.

We are here for you when you need us, with our funeral advisors available 24 hours.

At Francis Chappell & Sons Funeral Directors, we serve families with the greatest care, from our funeral directors in South East England.
Read more

We are at the bottom of the High Street, opposite the pedestrian walkway through to the Queens Square shops.

You can park on the High Street, Orchard Street, or in the car park off Pegler Way.

4.6
Rating 4.6
based on 13 reviews
Mr Sidney G.
Rating 5.0
Totally pleased. The staff I/we encountered were very professional, respectful and caring to our wishes and needs. The staff I dealt with were Cherrylyn Adlam and Karen Rubins-Lawrie (who also arranged/appointed the excellent Reverend Paul McMichael). On the day before (and the day of the funeral) James (surname not advised/known) was also brilliant. All were beyond reproach. Many thanks.