COVID-19. Please note that it is mandatory to wear a face mask at our funeral home.
Read our statement regarding our services during the Coronavirus Covid-19 Pandemic.
Return to Nav

Our Dumfries Funeral Directors can provide a meaningful funeral now for your family and an additional memorial or commemorative service later once everyone can be together again.
Where to find us
104 Annan Road
Dumfries DG1 3EQ
GB 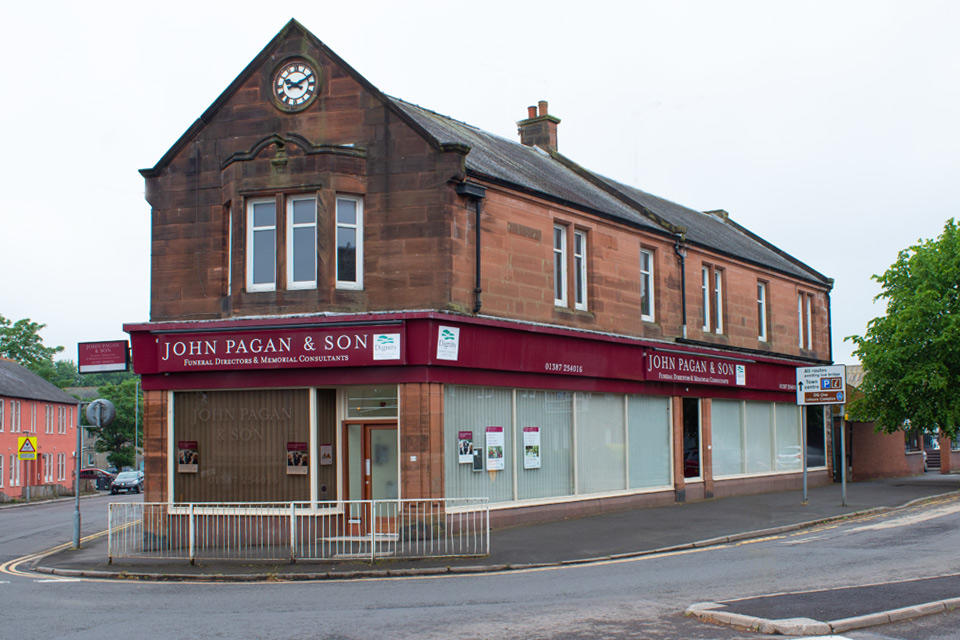 About our Dumfries funeral home

We are funeral directors in Dumfries, and we have provided respectful funeral services to our community for many years. Our funeral professionals will carry out every detail of your loved one's farewell with the utmost attention to detail, and our compassion and understanding will help see you through this difficult time. You can rest assured that your loved one is tended to with dignity and kindness when they are in our care.

For larger funerals, we have a service room that holds up to 120 people. Please call us to find out more about our services and funeral home.

We are on the corner of Annan Road and Brooms Road at the roundabout.

There is car parking available at the rear of the branch.

My mum had suffered severe pain in her final hours and her passing was extremely traumatic. To make matters worse, I had no funeral plan or insurance to cover the costs.

In the beginning, I had a different Funeral Director dealing with my mum's arrangments. Who removed my mum's body and once she was in their care. I was told to make an appointment, where the Director hit me with a £2000 up-front fee 'out of the blue'.
I was told I HAD to pay this £2000 up-front fee before I could even view my mum. It felt like I was being held at ransom by a Sheriff officer working for the HMRC. It was horrendous.

However, the staff at John Pagan & Son put this right. They didn't require a £2000 up-front fee. John Pagan's staff took my financial situation into consideration and compiled a more affordable funeral. Considerably cheaper than the previous one too.

Staff from John Pagan's immediately removed my mum from the extortionate funeral parlour and took her into their care. Where she was prepared for cremation and she looked absolutely beautiful, her hair was done in curls, make-up on, looking absolutely at peace, she really was beautiful. The service and eulogy were so beautifully delivered, everyone who attended the funeral commented that it was the most touching service they had ever been to.

I can not recommend or thank the staff at John Pagan's and Dignity enough. They turned a living nightmare into the most beautiful funeral that I had ever seen. They carried out my mum's wishes to the letter and thought of all the things that I had overlooked in my time of grief. Compassionate, kind and professional staff who go the extra mile and who take excellent care of the living as well as the dead.
Response from John Pagan & Son Funeral Directors
We appreciate you leaving a review online for your experience with John Pagan & Son. I am pleased that we provided the highest level of care and guidance for you and your family and that the service was carried out to your satisfaction.
Displaying reviews 1 - 2 out of the 7 most recent