COVID-19. Please note that it is mandatory to wear a face mask at our funeral home.
Read our statement regarding our services during the Coronavirus Covid-19 Pandemic.
Return to Nav

Our Upperkirkgate Funeral Directors can provide a meaningful funeral now for your family and an additional memorial or commemorative service later once everyone can be together again.
Where to find us
42 Upperkirkgate
Aberdeen AB10 1BA
GB 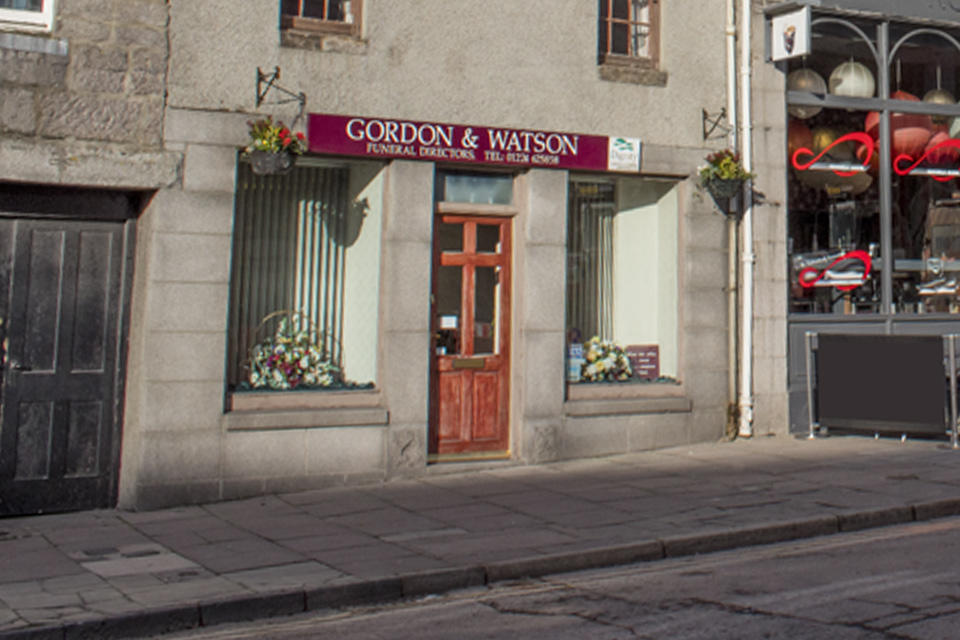 About our Upperkirkgate funeral home

We are near the centre of Aberdeen, and are easy to reach from the surrounding areas including Gicomston, The Green and Rosemount.

Our funeral home is a historic and valuable addition to the high street, being an original burgage building which was common during Medieval times. You can find us at 42 Upperkirkgate.

Our team of kind and respectful professionals are here to help you plan your loved one's funeral. We will make the arrangements on your behalf, ensuring everything is just as you want it to be.

You can call us at any time that suits you. Our telephone line is open 24 hours a day, so please give us a call as soon as you need our support.

At Gordon & Watson Funeral Directors, we serve families with the greatest care, from our funeral directors in Aberdeenshire.
Read more

We are less than a two-minute walk from the Registrar Offices at Marischal College on Broad Street.

There is paid car parking available on surrounding streets.

5.0
Rating 5.0
based on 1 review
Mrs Fiona P.
Rating 5.0
I would highly recommend Gordon & Watson's Funeral Directors, they provided a first class service for the funeral of my husband who sadly passed away on 13th April 2019, from the moment we contacted Dignity Funerals to walking into the office in Upperkirkgate, Aberdeen, where we were met by Margaret, a lovely, sympathetic woman who could not do enough for myself and my daughter.

My husband had been selected as 1 in the 10% of the population of the UK for a review into his death as can sometimes happen and holds up the process of getting the death certificate, we were also faced with the spring bank holiday, which pushed things back by a few days, but Margaret was not phased by any of this and went beyond the call of duty to ensure that all was arranged and in a timely manner, for my husband's funeral which took place on 23rd April 2019.

The days leading up to the funeral Margaret called to see if there was anything else she could do and to find out how we were coping with our loss. She even went out of her way to source an alternative printing company to get the order of service in time for the funeral, as the one regularly used wouldn't have been in a position to get them in time with the Bank Holiday, falling the day before the funeral.

On the day of the funeral everything was just as we had wanted, professionally done, with dignity. Thanks also to Kevin and his team for ensuring there were no problems whatsoever and to Margaret for coming along to the church to hand out the Order of Service.

Kind Regards
Fiona Peck
Response from Gordon & Watson Funeral Directors
Thank you for sharing your experience with us on your online review. I am pleased to hear that you found our staff to be professional and respectful and that the arrangements for your Husband were carried out to your satisfaction.