Pioneers of the profession

Over 130 years ago, David Poulton ran his funeral directors from Epping High Street, which was one of the first in the town to have electricity and run a motorised hearse. The business was ahead of the times compared to the local competition, and some would have considered D C Poulton to be a pioneer of the profession. Others, however, did not warm to the idea as quickly, with many people still choosing the more traditional horse-drawn carriage as their means of transport.

David's two youngest sons, George and William, left school after the First World War and joined their father in work. Sadly the eldest brother died in combat aged just 17. In the 1930s, they took over the business and played an important part in the community during the years of the Second World War.

The funeral home at 50 Hockerill Street was requisitioned by the War Office for lodgings for expectant mothers (mostly single mother evacuees from the East End of London) due to the severe bombings. The later staged expectant mothers were lodged there before being transferred to Twyford House where their babies were born.

The Air Ministry also chose D C Poulton & Sons Funeral Directors to supply coffins and repatriate those who had lost their lives in raids leaving from surrounding airfields.

Following in his grandfather, father and uncle's footsteps, Howard Poulton entered the funeral service profession after leaving school. Apart from a short period of National Service, he stayed in the business all his life until his retirement in 2015.

His brother Roger, who joined soon after Howard in the 1960s, closely followed him. It was around this time the business grew, relocating to our current premises on High Street as well as opening additional funeral homes in Essex and Hertfordshire to provide a more dedicated local service to local families. 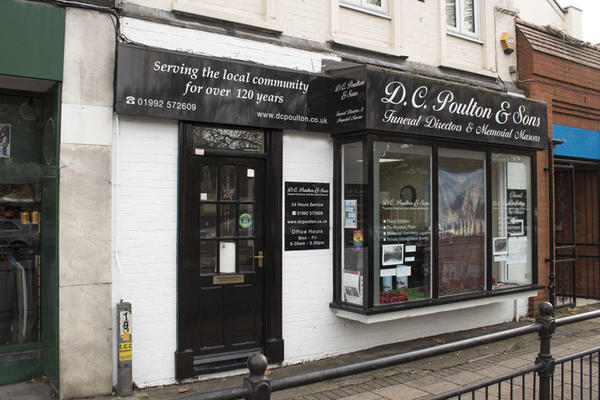