A personalised funeral for Neil Sharp

Here, Funeral Director David Pedelty tells us the story of an incredibly memorable funeral. The funeral was personalised by the family to include a skip lorry, in honour of a local businessman, Neil Sharp.

“The saying goes that “where there’s muck, there’s brass” and this was certainly true for Neil Sharp. Neil, if memory serves me right, had started working for a local waste disposal company in Aberdeen when he was just a youngster, but shortly after started up his own business operating under the title of Neil Sharp Waste Management. Having built up a very successful and profitable business, Neil sold up and intended to enjoy an early retirement with his wife, Edith, and their family.

He soon found that he missed the work and he didn’t take much persuading by Edith to buy a couple of lorries and skips and start up in business again, this time with his son. The new company was named EIS Waste Services Ltd (having sold the previous trading name (his own name) EIS was chosen as this is his wife’s initials). More muck, more brass!! EIS quickly became, and remains to this day, one of the most well known and respected waste collection/disposal companies in Aberdeen and North East Scotland.”

On Neil’s death, the family contacted Annette, area manager at Dignity, to attend to funeral arrangements and also to officiate at the funeral service. Annette had been friends with Neil’s daughter for many years and, as a registered funeral celebrant, was happy to officiate. Annette asked David to step in as funeral director for the family and arrange for Neil to be taken home to rest and lead proceedings on the day of the funeral.

We're here to help, whenever you may need us

Call us any time of day on:

“The hearse was filled to bursting point with the many and varied tributes that had been delivered to the family home, but this proved no problem when it came to taking Neil on his final journey from his home to the crematorium. His son, Neil Jnr, had already consulted us on dimensions and materials that would be required to ensure that the newest lorry on his dad’s fleet was fitted with a suitable platform to accommodate his dad’s coffin in place of the skip that would be its usual cargo. Great care had been taken in preparation of the lorry with every surface being polished to perfection. The flatbed at the load area was covered in green artificial turf with suitable braces in place to provide a secure bed for Neil’s coffin to lie on for his last trip.

After the hearse was loaded with the flowers and Neil’s coffin was securely strapped onto the load area of the lorry, the remaining family took their seats in our limousine and we left the family home to travel a couple of miles to the EIS Waste Services Ltd complex so that Neil could take one last tour round the yard before he left for the crematorium. Neil’s son could not face entrusting driving the lorry hearse to any of his staff and so he undertook this privileged role for his dad himself, accompanied in the lorry cab by his sister.” 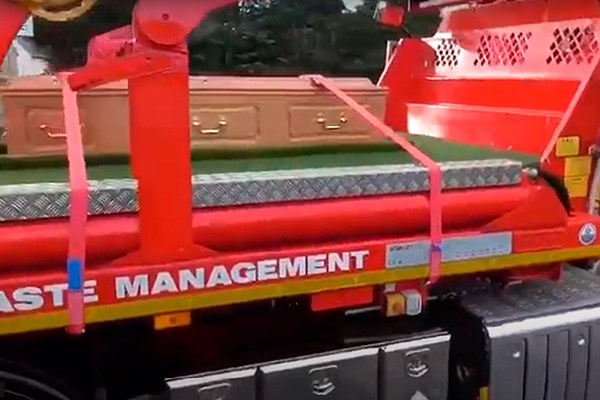 “Neil was so well respected by his workforce that a wonderful surprise awaited the family on arrival at the EIS premises; every member of their staff had turned out to provide a welcoming party as the cortege of floral hearse, lorry hearse, and limousine arrived at the offices at the entry to the yard. On passing the offices the access road goes around in a horseshoe shape to pass through the EIS yard allowing all of their waste collection vehicles to access all the areas that they would normally need to in the line of duty.

The entire length of this access road through the yard was lined with every vehicle from Neil’s fleet (various lorries of all shapes and sizes along with a variety of other commercial vehicles/tractors that no decent waste management company could do without), all with lights ablaze, and all with driver standing to attention to bow to “boss” as he passed by them. Neil Jnr was so overwhelmed by the attention to detail and by the respect that the workforce held his dad in that the cortege had to pause several times as we travelled through the yard to allow Neil Jnr to wipe the tears from his eyes before he could continue driving.

On leaving the yard we completed the remaining eight-mile journey to Aberdeen Crematorium where approximately 200 mourners witnessed the first, to the best of our knowledge, and only time that a coffin has arrived there on the back of a skip lorry!”

Flowers were provided by Neil’s daughter-in-law’s sister, a local florist who had worked with the team at Dignity for a number of years. They included, amongst a huge number of beautiful, but traditional sprays, bouquets, and wreaths, a floral skip lorry complete in every detail.

“The 'skip lorry' floral arrangement needed a solid wooden plinth to support its almost 4’ length and two of our staff safely to move it from the family house onto the floral hearse and subsequently from the hearse into the crematorium chapel where it enjoyed pride of place alongside Neil’s coffin on the catafalque.”

Here you can see how one of our many Funeral Directors organised a unique, fitting and memorable funeral for Neil Sharp. If you'd like to pay tribute to your loved one in a different and unique way, find your local Dignity Funeral Director.

Other ways to personalise a funeral

Floral tributes and alternatives to flowers

How music can personalise a funeral